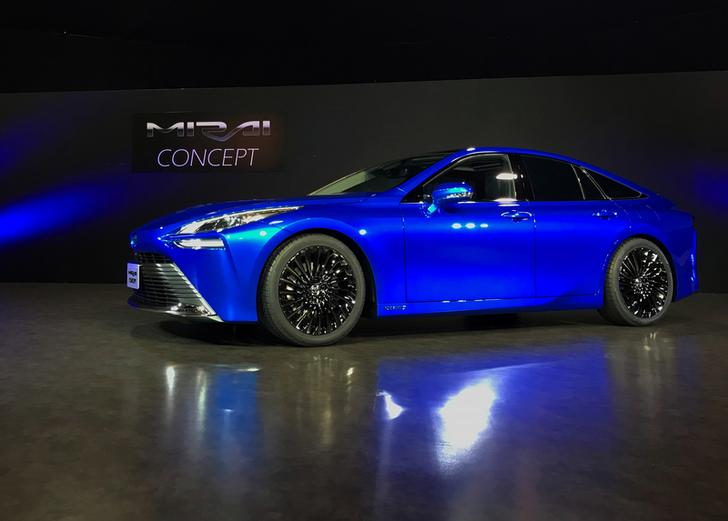 Recently, Toyota Motors Company unveiled the revamped version of its top featured hydrogen-powered fuel-cell sedan car (pictured above), a step taken to cope with the demands for the niche, which is believed to be taken as mainstream soon. Japan’s automobile giant, Toyota, has been well regarded for manufacturing fuel-cell vehicles for more than 2 decades, but the niche has shivered with the advent of the battery-powered car, Tesla. Tesla alone has sold out impressive numbers successfully to end up a rival.

The design of a conventional automobile is based on a fundamental principle of internal combustion(i.c) engine driving the propulsion shaft to move the vehicle on the road. This engine geared with transmission box provides various options for speed and thrust.

With the increasing complexities (including cost and pollution) associated with the fuel, the need for an alternate source driven automobile became inevitable. This led to the development of electric cars and their variants. Electric cars, commonly known as ‘Electric Vehicles (EV), generally refer to any vehicle using an electric motor instead of an i.c engine. These motors are typically powered by stored rechargeable batteries.

With initial efforts having roots in the late 19th century, EVs began to gain fame in the early 20th century, amid the peak of the industrial revolution. The then models with several limitations didn’t succeed in reaching the level of mass production due to certain limitations with the designs those days. The niche, however, earned its resurrected attention in the year 2008 with the enhancement of batteries, and the environment associated with the fossil fuel wastes. Extreme desire generated to minimize the greenhouse gas emissions, which was not possible in case of gasoline engines (i.c engines) beyond a certain limit, but with almost negligible emissions generally, and no tailpipe emissions completely. Like a gasoline car gets fueled from a gasoline station, an EV implies an alternate called ‘charging station,’ capable of getting installed public places, as well as an in-house facility.

YOU MAY LIKE: Is “Range Anxiety” Preventing You From Buying an All-Electric Vehicle?

The niche observed considerable developments, and the technology keeps improving with the limitations getting overcome slowly and steadily. The companies now manufacturing EVs can share a viable portion of the market, though still less if compared with i.c engines, but figures are higher than the earlier phases.

Among the famous vehicles are Nissan Leaf, Tesla Model S, Tesla Model X, Tesla Model 3, BMW i3, and Renault Zoe. Many automobile giants look seeking towards the niche in to have their share.

In parallel to EV moves the fuel cell technology. Fuel cell vehicle (FCV) {also termed as fuel cell electric vehicle (FCEV)} is a variant of an electric vehicle with significant difference complies with the modification of the battery or the type of the battery. However the basic principle remains the same, i.e., the electric motor is the prime mover to drive the vehicle instead of a mechanical engine (i.c engine).

FCV uses fuel cells that serve as a supercapacitor, i.e., a combination with the battery to enable power for its on-board electric motor. Fuel cells are capable of consuming oxygen from the atmosphere and utilize it with the stored compressed hydrogen to provide electricity for its electric motor. Like a conventional EV, fuel cell vehicles are also hailed for being zero-emissions vehicles, with major emissions to be water and heat. As to charge FCV, hydrogen stations are designed to refill the hydrogen capacity and are being made available in public places, unlike a typical electric vehicle for which the charger can be made available in-house as well.

Famous FCVs in the market are Toyota Mirai, Hyundai Tucson FCEV, and Honda Clarity. All of these models are rated for economical fuel consumption, one of their dominating features. The mileage for both; EV and FCV have always been a subject of the question for the end-users. For EVs, it highly depends on the number of batteries and their types used in the cars. Reportedly, the overall best-rated mileage is found out to be 540 km, driven by Tesla Model S, before getting in need of a recharge.

FCV, too, offers a similar range, with a maximum rated output of 580 km by Honda Clarity.

Toyota’s envisage of its new FCV

Toyota claims that the modern Mirai model offers a more extended driving range than its preceding version and fully redesigned fuel cell stack and hydrogen tanks. “We wanted to make a car that people really want to buy, not just because it’s an eco-car,” says Yoshikazu Tanaka, the chief engineer for designing new Mirai at the unveiling of the Model. Yoshikazu added that the intention was to customers an advanced feeling of care, comfort, and fun.

Newly introduced sporty design with a lower-slung chassis and a longer wheelbase is an impressive deviation marked from the first-generation Mirai, that was reminiscent of its bulked-up car, Toyota Prius hybrid.

Besides, the new vehicle will also be able to enjoy a 30% improved driving range over the former limit approximately 700 kilometers (435 miles), explained by Toyota company. Yoshikazu said the manufacturing cost for the new Mirai would be less than that of its predecessor, as the mass production enables to contain expenses per piece. The present Model is subjected to job shop production with mostly manual inputs. With a cost of approximately 5 million yen ($46,500) (inclusive of the subsidies in Japan), the original Mirai is one of three fuel cell vehicles available in the market. Hyundai Motor Co has its version with the name the Nexo, while Honda Motor Co Ltd sells the Clarity.

What does the sales figure tell us?

It would be unfair to comment yet on the new Mirai since it’s in the very initial stage of its execution. Previous figures are, however, available to infer the performance of Toyota’s FCV against Tesla’s EV. Toyota has sold units fewer than 10,000 of the Mirai, a competitive figure in the fuel cell niche, but relatively less than what they assumed to be a game-changer when they launched it 5 years ago.

If compared with Tesla, the pioneer in electric car manufacturers, the figures are substantially low. Tesla successfully sold 25,000 battery-powered S model sedans in the first and a half years of its launch. This figure must’ve disturbed Toyota designers, which they expressed in their attempt to tackle with their newly designed fuel-cell vehicle, which they believe will compete Tesla.

The price for the new Model has yet not been disclosed by Toyota Motors Company. However, they’ve hinted about its availability in Japan, North America, and Europe in the late next year.